Two friends of ours in their eighties have been forced by a number of physical challenges to move into “assisted living.” It’s coming to all of us, folks, one way or another. They sold their house precipitously and somebody threw all their possessions into cardboard boxes, which were moved to a storage unit and piled ceiling-high. I will quickly pass over the fact that the same hand that packed their stuff higgledy-piggledy—or perhaps some other hand—got away with all the lady’s crystal, fine china, and jewelry.  She’s over it, so I should be over it too. Now it’s time to deal with what’s left. 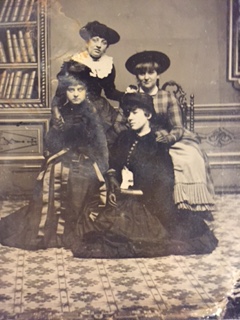 Our friends go to the storage unit every day and open these boxes, which have to be cleared out before the rent comes due on the unit.They try to sort things. What to keep, in an assisted living facility where there is no storage, there are no locks on the doors, and the staff is light-fingered?  What to throw away, among the memorabilia of two long and distinguished lives? Since they haven’t any children who seem to be interested, we—that is, some of their friends from church—have been stopping by every so often to try and help. Snapshots, souvenir travel booklets, certificates of awards, linen table napkins, children’s books, handkerchiefs, razors, cups, straw baskets, screwdrivers,  old clothes, knick-knacks, tintypes of mysterious unknown relatives, all thrown together in three-foot-square cardboard boxes, with packing paper crammed in to fill the spaces. Bit by little bit we get it squared away.

Why am I telling you all this? As a warning, that’s why. Those of us who are still able-bodied and more or less in our right minds need to go through our own stuff now, today. At least one of the helpers went straight home from the site of this disaster and started in on her stuff.

I must start in on mine. My first editor (may he rest in peace) told me to keep all my papers. He said they would be valuable someday, so I have three bins of literary papers under the guest bed, and you know what? No one will ever want to look at them. I have long since abandoned the fantasy that some graduate student in the distant future might be interested in my work. As for the editor, he died in a hospice in Brooklyn (possibly the same hospital where my grandmother did her nurse’s training in 1903, but that’s neither here nor there). He had no children. What happened to his papers? Probably hauled away by the New York City sanitation people, along with his worn-out handkerchiefs, razors, cups, screwdrivers,  old clothes, kitchen utensils, and knick-knacks.

It just seems sad. Sometimes the passage of time itself seems sad. What to keep? What to throw away? The time to decide is now. Get busy.

Writer, joker, museum docent and tale-spinner, thirty-year resident of the quirky town of Lambertville View all posts by kategallison